The other night we pretended to be southern and indulged in fried chicken, corn on the cob, green beans, potato salad, and buttermilk biscuits for dinner. And we couldn’t finish half of it. It’s still somehow hard for me to learn to not cook so much some nights! I’m sure in about 10 years I’ll have to cook that much since we’ll have four “teens” in the house, but in the meantime, there’s leftovers. And biscuits and gravy for breakfast! I’ve been boldly frying chicken for a few years now and I haven’t strayed from Ree Drummond’s recipe (though I don’t have to look it up anymore). The chicken comes out golden and crispy every time and thoroughly cooked and juicy! There’s something about standing in the kitchen and frying chicken that makes me feel like life’s simpler than it is. And my kids LOVE it, which is always a good thing! We mix honey and butter to smear on the biscuits and we’re instantly transported to another place and time as we sit around the dinner table talking and eating with our hands. Even though this meal heats of the kitchen pretty well, I still feel like it’s a summer meal.

We’ve been eating some good summer food around here, lately, and getting creative with our summer beverages! I’ve been wanting to try a new drink for some time now and finally Randy and I made the latest coffee craze for ourselves–maybe you’ve heard of it.  Imagine combining iced coffee and lemonade?! Yep. Try that and you’re officially “hip.” 😉 Here’s how it worked: I combined our iced coffee (leftover and refrigerated from our morning pot–but you could also use cold brew, and what would probably be better is a cold brew espresso or something nice and strong), the juice of one lemon, some sweetened condensed milk, and topped it off with some club soda. It was actually pretty good! It was a coffee version of the “spritzer” drinks we’ve been having all summer. I served it alongside some lava cakes I’d been dying to make so we could have a “special” evening. Typical Wednesday night around here. 😉

With summer slipping away (I know, say it isn’t so!), I felt compelled to make a berry pie before the season is completely gone. I feel like it’s the quintessential summer dessert and I couldn’t believe I had let so much time go by before actually making one! Here’s the thing, with three small children and pregnancy fatigue getting to me, it’s not easy to slip into the kitchen and bake something for fun. Whenever I watch one of those cooking shows, I always wonder why I feel jealous of the person I’m watching cook–it can’t be because I don’t know what I’m doing in the kitchen, because I do! And I think I have a pretty good set up and equipment, so what is it that makes me long to be inside that show and not cooking in my own kitchen??? Oh yeah, it’s the fact that I always have kids running around me making it nearly impossible to concentrate! 😉 So when my parents offered to take the two older kids out for the afternoon while the one-year-old napped, I knew what I would be doing with my free time–baking a pie! And not-so-amazingly, it took way less time to accomplish than I’m used to! Ah, the magic of kid-free kitchen time! So I concocted this recipe for a Triple Berry Pie and served it with homemade vanilla ice cream. So delicious! So summer!

Combine the flour, sugar, salt, and butter in a food processor and pulse. Add the egg, vinegar, and water and continue to pulse until the dough comes together. Divide into 2 disks and wrap both in cling wrap and place in the refrigerator for at least one hour.

Combine 1-2 pounds strawberries (de-stemmed and halved), 1 pint raspberries, and 1 pint blackberries. (You can adjust amounts based on your personal berry preference.) 😉 Add about a cup of sugar and let sit in the refrigerator for an hour. (This will allow the juices to come out of the fruit and can be drained off for a less soupy pie.)

Drain the juice from the fruit and then add a 1/2 cup of sugar, the zest and juice of 1 lemon, 3 TBs tapioca flour, and sprinkle in some cinnamon. Mix well.

Roll out one of the dough disks and place in a pie pan. Pour in the fruit filling. With the second disk, I like to roll it out and cut strips to weave together a lattice top crust. 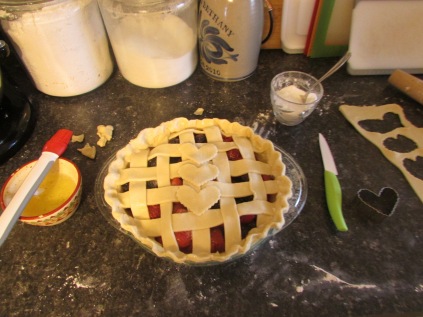 Once the pie is assembled, brush it with an egg wash (combine 1 egg and a little water), and sprinkle with sugar. Bake at 425* with a foil collar for 30 minutes, and then remove the collar, reduce the heat to 375*, and continue baking for another 20-30 minutes. 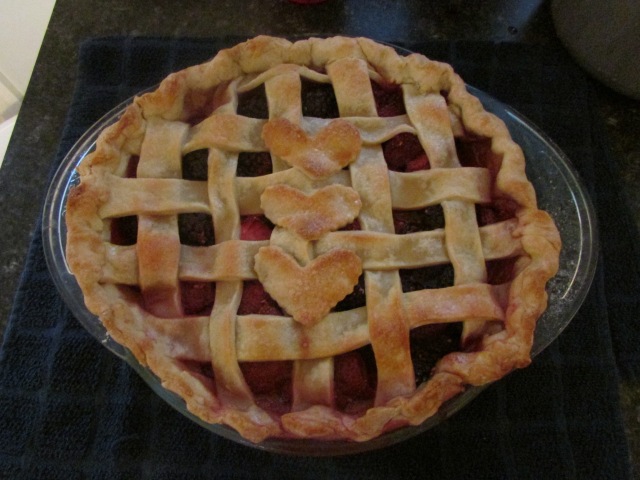 Allow to cool before cutting into the pie. Enjoy with some vanilla ice cream or whipped cream (or both)! And enjoy these last few weeks of summer before it’s all just a delicious memory… 🙂

Sometimes I like to do art WITH my kids. It's fun to participate and learn something together. And I love a good painting project myself!
As much as I love spending Valentine's Day alone with my husband (we celebrated last weekend with a fancy dinner out) there is something so special about celebrating with my kids, too. Every year I write them little love notes; one a day from February 1-14. And recently they've taken it upon themselves to do something special for us on Valentine's Day. This year they made breakfast all by themselves!